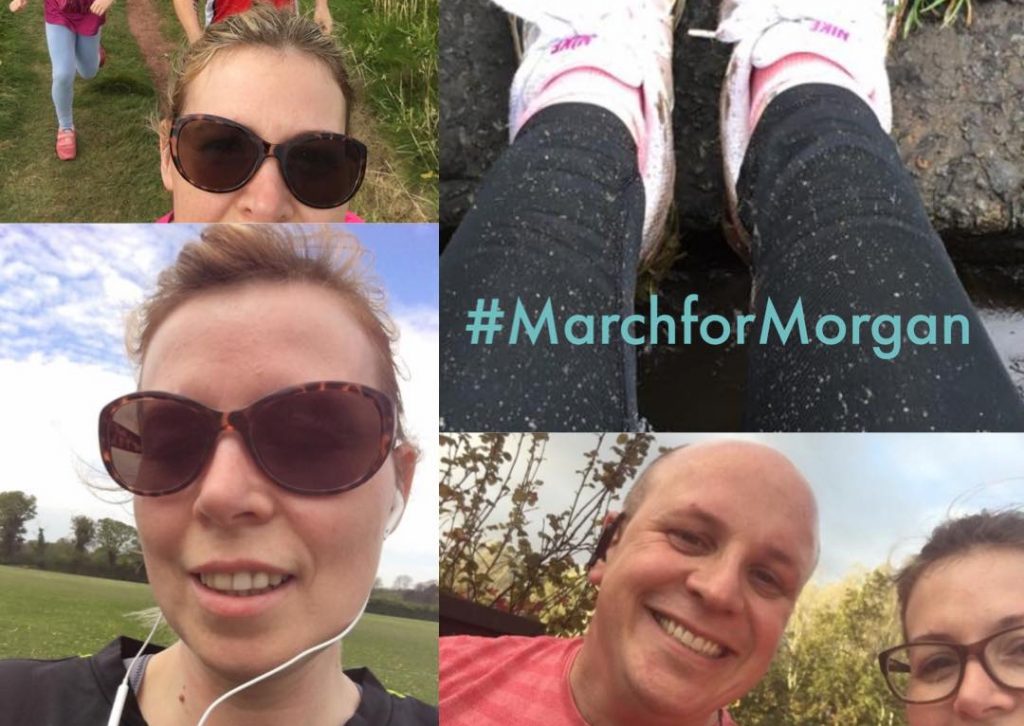 Last year we embarked on our first March for Morgan. It was still really early in our grief journey and we wanted to raise funds for miscarriage support and we wanted a way of promoting Morgan’s Wings. We were also looking for something to help get us out of the house. We had done some research and it all said that exercise was good for mental health and so we decided to do a sponsored walk. Then we had to choose a name. I love a bit of alliteration (and Geoff loves the odd pun or 7 million!) and so March for Morgan was born!

We also wanted to make it achievable for anyone else who wanted to join us so we decided to advertise it that you could march, walk, run or even dance. It didn’t matter what, as long as you completed 26.2 miles over and above your normal every day activities during the month of March.

We wanted to make sure that this was done above any normal every day walking such as to and from work so we made a conscious effort to get out of the house every day after work and on the weekends. You wouldn’t think it was that much of an effort but I had been virtually housebound since my miscarriage and the physical aspects had left me with amenia and so I was absolutely exhausted.

We planned a final day at Roath Park on Sunday 29th March and invited all our family, friends and followers to come and cheer us on during the last leg. We had planned it so that if we did a mile a day then we would make it easily but… life gets in the way.

We headed out on the 1st March and completed 2.6 miles, I ran and Geoff walked around the beautiful Roath Park in Cardiff. It was a great start, but, some days there just didn’t seem to be enough time to go out for a walk or a run.  We tried to squeeze in the miles when we could, usually at  the weekend.

On the 14th March we decided to climb Pen-y-fan. It was so cold, wet and windy but we both felt a great sense of accomplishment afterwards. It was only just over 4 miles but practically vertical in places, but we weren’t finished, we still had several miles left to go.

Then the news of lockdown hit and we had to cancel our invitation to family and friends to watch us complete the final leg on March 29th at Roath Park. It was a blow but we weren’t going to let Covid 19 stop us from reaching our target.

But it wasn’t over

We continued getting out when we could and when March 29th came we were actually slightly ahead of schedule and finished our March for Morgan at Roath Park as planned but with no one to cheer us on as we finished.

So that was last year.

This year we are Marching for Morgan again and have some friends and followers joining in too. Geoff and I would love to raise even more funds for miscarriage support and have a target of £250.

The money raised will go towards miscarriage support, our care packages and making up memory boxes as we know that a lot of people affected by miscarriage wont have anything tangible and so we hope that we can help them in that way.

If you’d like to sponsor us please visit our Just Giving page.