One Year of Morgan’s Wings 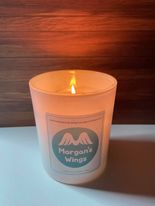 It’s been a year since we started Morgan’s Wings and what a year it has been! It has been a huge learning curve and we have been constantly evolving and adapting the support we offer especially in these difficult times.  I wanted to write about how it has all gone, so here goes…

Following our miscarriage in 2019, my husband and I recognised a gap in care and immediate support.

We wanted to provide parents in local hospitals who were going through miscarriage with an emergency hygiene care package to ensure that any overnight stay would be as comfortable as possible.

We also wanted to provide remembrance boxes to remember babies who gained their angel wings. Especially those who were miscarried as these babies often aren’t considered as requiring a memory box.

In addition to this we wanted to offer continuous support in the form of a befriending service, support groups and sessions to help with the bereavement process, self esteem and more. When it happened to us we had no idea where to turn for support.

Having decided to set up a charity, we had no idea where to start.

We had decided to name our baby Morgan so it didn’t take us long to settle on Morgan’s Wings as a name. It is in tribute to the baby we lost, but also hints that by helping parents of other lost babies we are providing them with ‘wings’.

Next we worked with a close friend who had a background in graphic design to design our logo. I can’t tell you how many sets of wings we looked at! Through lots of meetings we tried different fonts, text sizes and wing types. After a lot of discussion we settled on our logo as it is today.

We started a Facebook group and shared it with our friends while asking them to share it with theirs.

Finally we set up a bank account, a website, and we started to think of fundraising events and support groups we could arrange. This included a launch party where we would auction off prizes, run some stalls and raffles as well as just celebrate what we were trying to achieve…but then….

Covid-19 appeared and changed everything. Suddenly we were cancelling events and bookings for fundraising events and support groups and scratching our heads with what to do next.
Luckily we were still able to complete our first major fundraising and awareness event “March for Morgan”. We decided to run/walk 26 miles (the same distance as a marathon) throughout the month of March. We had some sponsors and did our first Facebook live videos which helped raise awareness and support, as well as giving us the chance to get used to filming ourselves.
At this point we were looking for content online and sharing that via our Facebook group to inform and support people, it wasn’t until mid April we started to create our own content.
In April we also filmed and published our first YouTube video on our Morgan’s Wings channel. This was a huge step out of our comfort zone!
I wrote a piece for Cardiff in lockdown about how the Coronavirus had affected me after my miscarriage and was thrilled when this was published. I also signed up to do an online course in loss and bereavement.
Word had started to spread and in May some other very brave parents decided to share their stories with us for publication to our website. Sharing in this way helps people who are going through it to realise that they are not alone.
In May we also created our ‘Certificates of Life’ to acknowledge that your baby existed and was important. We shared a post on a miscarriage support page and we ended up producing 61 certificates in one week for families all over the world including America, Canada, South Africa, England, Ireland and the Philippines! To order your free certificate of life please visit Morgan’s Wings (morgans-wings.co.uk)

June saw the exciting news that I had been accepted onto a counselling skills college course.

The popularity of the Certificates of Life led to an increase in our online supporters and commenters on our Facebook page.

We decided to start this blog, as another way to connect with our new audience and also to commemorate Morgan’s due date (which was in July)

Meanwhile in the background we were in contact with hospitals across South Wales to discuss our care packages and how to deliver them.

In August we made the first delivery of care packages to the Gwent Hospital in Newport and to Neville Hall hospital in Abergavenny.

What a moment that was! After all this was why we were originally set up, to provide care packages to local hospitals so that parents who were kept in overnight could be more comfortable.

In September we worked with some local funeral homes to encourage them to commemorate Baby Loss Awareness Week.

That work led us to Coles Funeral Home who agreed to put up a memorial tree in their lobby area. We were able to raise some money by selling stars and hearts that people could use to commemorate their lost babies and these were kindly displayed by Coles for us.

Then in mid October we were halted in our tracks, we’d had a second miscarriage and lost Baby Bee.

It just became too raw and difficult for us to focus on Morgan’s Wings at that time, although the support we received from the community we’d helped build was incredible and really helped get us through it.

In mid December we slowly started to pick up and we started to raise some funds with special Christmas novelty items for sale on our website.

We also saw the first anniversary of Morgan’s birth over Christmas which was especially difficult for us having gone through it again so recently with Bee.

With a new year though we recharged our batteries and dusted ourselves off. Since restarting we have made some changes to our shop, it is now on Facebook rather than our website, and we have continued to provide certificates to families all over the world who are affected by miscarriage.

Our social media following continues to grow along with our community and we are hoping to do some special things in 2021.

So what’s next for Morgan’s Wings?

We are looking forward to our first interview with “Why is this a podcast?” which will be on YouTube soon.

We are planning to offer memory boxes for parents who have gone through a miscarriage.

We are dedicated to improving awareness and aim to make Baby Loss Awareness Week even bigger this year and are hoping to work with the local council and other charities to make this happen.

Our main target this year is to reach the benchmark of funds raised so that we can register as a charity. That target is £4000 so we will need all of the help we can get!

The first flagship event of the year is March for Morgan where we ask people to get sponsorship to complete a marathon distance across the month of March. Find out how you can get involved.

Finally we want to say a special thanks to the people who have helped us over the year. This includes people and companies who have donated raffle prizes, volunteers who have created items for us and others who have been instrumental in setting up Morgan’s Wings:

Our graphic designer (who wishes to remain anonymous)

Alicia from Bodyshop at home

Appologies to anyone we may have missed out.

Here’s to a fantastic second year!!